If I were to throw out "The Last Waltz", there is little doubt none of you would know what I was talking about.  A concert held 45 years ago, and meaningful to me, has no relevance whatsoever to your lives.  On the other hand, "The Last Dance", a recently aired Netflix series about Michael Jordan's Chicago Bulls, may bridge the gap a bit.  But one thing that touches us all is "The Last Practice."

When we got together in June, nearly six months ago, for strength and conditioning sessions, and throughout the summer each Tuesday and Thursday evening, our season effectively got under way.  I was optimistic when many of our athletes requested and faithfully followed our summer training plans.  I was buoyed by a good representation from our Freshman class when formal practices began.  And throughout the season I was impressed with the dedication of all of you, and even more so by your improvement.  We all anticipated a season like no other with the pandemic hanging over our heads and the modifications necessitated by that.  But our teams followed rules and met expectations, just as they had the training plans, and what followed was a remarkably successful season for all of our athletes and coaches. Was it perfect?  The Boys' record aside, no.  But we had 62 terrific kids on our teams, who challenged themselves each and every day, and I believe were almost all pleased with the outcome.  If not, each and every one of you should be.

At the beginning of any season a coach evaluates the talent on the team.  We knew we had some very good runners.  But what we really hope to see over the course of the season is improvement among ALL our athletes.  And this year EVERY athlete improved his/her performance.  As a team, we were nearly injury free, with only 4 individual meets missed due to injury, out of a possibility of 310 (5 dual meets. 62 athletes.)   Attendance at practice was far better than in the past, in spite of the logistics problems created by remote learning.  From a coaching standpoint you can't ask for more luck, effort and improvement than what you gave us this season.  For that reason, and countless others, it why I hate to see the season end.  I hate to hold "The Last Practice."

Beyond today, I'm not certain what lies ahead.  When I know, you'll know.  But I will always look back on this season as one of my most enjoyable.  You are a marvelous group of kids, with incredible futures ahead of you. A simple "thank you" doesn't seem enough, but it is all I can offer for the opportunity and privilege of working with you.

The Captains have asked that today's voluntary practice be moved to 10:45, and the boss has allowed me to change my work schedule . . . for today anyway!  We hope to see many of you there, but understand the late notice may preclude your attendance.  Today will be an easy run, following up on yesterday's workout.  It's a cold one.  Bundle up.  But we'll get a little sweat in before we're done.

Congratulations to all the award recipients!  Well deserved!

AND THIS JUST IN:  The team Sportsmanship Awards in the Keenan Division went to the Duxbury Girls team, and after the ENTIRE team awarded flowers to our Senior girls and gave our buses a standing ovation on our way our of their  parking lot, there is little wonder as to why!  And on the Boys side . . . Whitman-Hanson!  And again, deservedly so.  A truly great group of kids.  Modest, self-effacing, cheerful and respectful toward all opponents and coaches!  Congrats, men - from 1-32.  You're the best!

I woke up to a texted question from one of our athletes . . "hi do we have practice tomorrow"

Nothing makes me happier than when any athlete, after completing a season's worth of work asks the very same day as the final meet, can I do more?  You may not have made the same interpretation of that text message, but knowing the athlete I can assure you that was the motive.

And the answer is, there is no practice today, Thursday.  However, MIAA rules allow us to practice until November 20 and I just sent an email to our AD to clarify this in the hope of extending our season just a tad.  In fact, if a competition opportunity arises I'd love to take advantage of it.  I know Quincy/North Quincy is traveling to Hingham on Monday.  Maybe we could get something started.

On the subject of getting something started, I want to put this out there for your consideration.  Because I'm not on the staff at WHRHS as anything other than a coach, I can't be certain there is not a DEI Club (or the equivalent) but I had a look at the list of WHRHS clubs and found nothing.  Information can be found at the following link and I'd love to see some of our kids involved in the creation of what I believe would be a valuable experience:

More information can be found here:

So, today take a well-earned day off.  I'll wait to hear from Mr. Rodgers to determine what we can do, for the immediate future anyway, and keep you posted.  But I am sincerely hoping we can practice again tomorrow . . .

Check back here for details.

FOLLOW UP:  If any Cross Country athletes would like to continue practicing through November 20, they are welcome to do so.  There is no requirement other than your desire to participate.  Your season has effectively ended.  Post season awards will be presented on the basis of what you've may have accomplished to this point.  But, I plan to be there at 2:30 tomorrow (Friday) afternoon with a training plan, ready to go. Just in case . . . 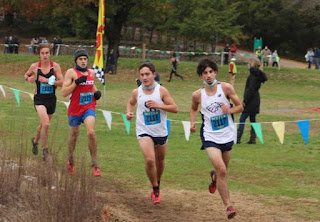 Theo in an unfamiliar position (the MSTCA CUP promo)

Posted by Steve George at 6:15 AM No comments:

That's all I've got right now as I sit at my computer checking Fisher Division Twitter pages, XC websites, Mayflower Timing, repeatedly to get combined results.  When I know you'll know.

(1) How solid our girls ran - Anna went down with an injury, but Myah was her customary awesome at #8, and Isabelle at #9 was no surprise to anybody who has watched her over the years.  Bryn and Sarah were tremendous out of wave 5 and our Freshmen (Caroline, Lynn and Sky) were fun to watch.  Each one has great potential.  And improvement was evident in the efforts of Allie and Hailey who have become major contributors this year. I already look forward to next year with most of these kids returning.

(2) In addition to our Freshman Girls, we have some talented Grade 9 Boys -  Today Gavin McCarthy, Logan Bourgelas and Shane Johnson ran well at the Patriot League Championship.  All Freshman.  The last time we had three Freshman in the League Meet, we had Theo, Liam and Chris, and you know how that turned out!  Add to that the fact, we have other outstanding Freshmen in Andrew B, Mateo, Connor, James and Adam, I'd have to say the future looks pretty bright.

(3)  It is just shy of miraculous that the cohort of Theo, Liam, Chris, Nathan and Gordon, who worked so hard since June preparing and throughout competition, ran injury free -  Distance running can crush anybody really, but not those five amigos.  Maybe it was the attention to proper training, or a proper diet and rest, maybe it was just luck.  But those guys went wire-to-wire to lead our Boys to a Patriot League Title and a couple of #1s today.

WE INTERRUPT FOR AN IMPORTANT BULLETIN

After a considerable number of calculations the following was submitted to Administration and the local media moments ago:

Whitman-Hanson Girls Cross Country closed out its season with a 6th place finish at the Patriot League Championship Meet on Wednesday at Hingham.  The top finisher for the Panthers was Junior Captain Myah Kamperides who placed 9th overall in a time of 21:01.  Right behind her in 10th place was Senior Isabelle Amado with a time of 21:18.  Also scoring for Whitman-Hanson were Senior Captain Bryn Miller (39th; 23:15), Junior Sarah Boulger (48th; 23:46) and Freshman Sky Bucci-Anderson (56th; 24:12.)  The overall winning team was Marshfield High School, followed closely by Hingham.

Posted by Steve George at 6:05 PM No comments:

Saturday at Wompatuck provided a reminder of how much I enjoyed running there for years and how much I especially enjoyed running on warm autumn days.  One of the notes made in my journal then should be of no surprise.  Saturday was the best practice of the season.

Yes, I asked our athletes to take it back a bit.  And understandably there was not the usual turnout. But our numbers were augmented by some of the Hingham boys who were welcome company to those in attendance.  Sports builds unity and solidarity, even among rivals.  As an observer of young people in sports, I find that very gratifying.

Yesterday was a day off, and we continue to "taper" for Wednesday's race.  I know there are some of you for whom that creates minor anxiety.  But, I promise you, the rest will pay off.  There is substantial documentary evidence of this fact.  But I'll provide the following example, which you'll note concludes, "by taking a break, then resuming training with renewed energy and vigour, you'll be ready to push past your previous limits." The article admittedly deals with extended breaks, but if you can accept that premise, you should have no problem agreeing that reducing training stress in the week leading up to your biggest race of the season is beneficial.  It's well worth reading:

The wave listings for the Patriot League Championship race have been completed and will be shared with you today at practice.  PLEASE NOTE:  Girls should arrive at Hingham High School on Wednesday at 9:00AM for a 10:00AM race.  Boys should arrive at 10:00AM for their 11:00AM start.

At the suggestion of some of our Seniors, Saturday's "long run" practice will be held at Wompatuck State Park in Hingham at 8:30.  Directions to Wompatuck from WHRHS can be seen at the following link:

Once you enter the park we meet at the first parking area on the left.  ALL are welcome.

Fun Friday will be an EASY day for all.  Due to today's soccer match with Hingham, all the gates into the practice field will be locked except those near the half-time building.  We will be starting at the usual place and time so plan ahead.

The Patriot League Meet will take place on Wednesday November, 11.  Right now, the Keenan girls will start sometime between 10:00 and 10:32AM, the Keenan boys between 11:00 and 11:32AM.  The following entries/seed times will be submitted tomorrow following practice.  If there are any changes to be made, please advise me immediately.

For a preview of the course you can go to this link:  http://legacy.usatf.org/routes/view.asp?rID=609644

More on tangents later.  Additional information and instructions will follow as they are received.