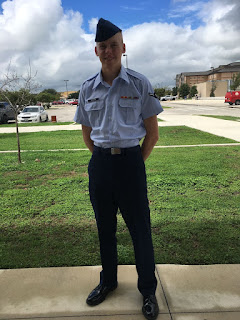 Andrew Newman recently graduated from U. S. Air Force Basic Military Training at Lackland AFB in San Antonio, Texas.  If you attended the MVP event earlier this year you would have heard Andrew being described as "Whitman-Hanson's most dedicated athlete."  Obviously I have a lot of respect for Andrew as a runner.  My respect for Andrew grew when he became a member of the National Honor Society and grew yet again when he was awarded his Eagle Scout.  Knowing what he went through to become "Airman" Newman this summer (take a look . . . https://www.military.com/join-armed-forces/air-force-bmt-boot-camp-schedule.html ) only deepens my respect.  THANK YOU Andrew.